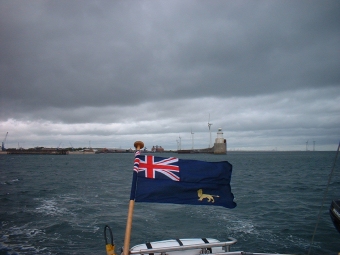 Blyth over the stern

Finally at 0903 hrs Wednesday morning Tamara slip her moorings and head out into south harbour to begin her trip south. As the weather forecast wasn't favourable and we had expected to leave at 0600 hrs, we headed for Royal Quays to fuel up and then sail to Hartlepool, Tony came along to RQ to say goodbye and after taking onboard 100 ltrs of fuel we left at 1245 hrs bound for Hartlepool, wind a steady 12 Kt in the river and increased to a nice 17/20 Kt out at sea, as Tamara likes a bit of wind she was nipping along very nicely at 8 kt, the flux gate compass had been playing up in the marina, this was obvious by the chart plotter flipping 180 degrees and then locking onto a heading. I thought this may be with standing powered down for so long, as it happened it wasn't the compass actually had a major problem, it was dead. During the afternoon the wind increased steadily until they we hitting 30 kt On arrival at Hartlepool a phone call to Raymarine and a couple of quick checks with the meg meter confirmed it was truly dead, one more call to Andy at Storrar Marine on the Coast Road got a replacement on route care of Scarborough harbour masters office which was to be our next port of call.

rudder sensors can also affect the compass so the checks for that are
red - green 5 K ohms in any position
blue - green 1.66 K-3.3 K ohms from left stop to right stop 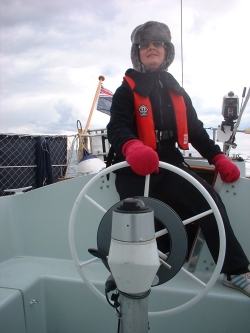 Debs on the helm


May 9th
We had planned stay at Hartlepool today as the weather forecast was to be F7 or F8 South Westerly, good direction wrong force, so we then planned our day around the weather bound scenario, however by mid morning it was obvious the weather was going according to plan and as the compass was en-route to Scarborough we decided we would make a run for it. A quick trip to the marina office to settle the bill, check the tides and latest weather confirmed we could arrive at Scarborough within the tidal gate without problems. So at 1245 hrs we slipped our moorings, requested a lock out and as soon as we left the lock the wind veered Southeast, which was dead on the nose, the current weather forecast was for the wind to become cyclonic. It didn't it stayed on the nose for the eight hours it took us to motor to Scarborough, wind strength 12/15 kt Typical of Teesbay it had it groups of three waves which kept stopping the boat in it's tracks. Just after 1900 hrs it began to rain, the rest of the trip was completed in freezing conditions. We finally arrived at Scarborough at 2130 hrs with wind strength increasing and rain During he booking in process I confirmed with the harbour master that the compass had been confirmed and was to be delivered to the HM office the next day. Tomorrow's weather is even worse as F8's are expected, never mind as it's 30 year since either one of us have been in Scarborough we could use the time to reacquaint ourselves with the town. May 10th

0600 hrs A bright calm sunny day that could have been anywhere in Europe, it wasn't to last the F8 forecast was to arrive within 30 mins and would last until 2000 hrs We decided to go out around the town, there is a lot of regeneration happening at Scarborough with 30 million been spent on the North Bay alone, all the harbour front is in the process of redevelopment, this is making a huge difference. The compass finally arrived at 1630 hrs minus a few parts, a couple of phone calls later and thanks to Andy at Storrar Marine and the parts were in the post for the next day. Thanks Guys you did a sterling job! Moored just in front of us is a couple who are doing the same, they sold their house and decided it was time to travel and fulfil their dreams, Ann and Ian are heading North to the Orkneys, as it happens around the same time as Andy and Linda will be leaving Blyth to do the same. 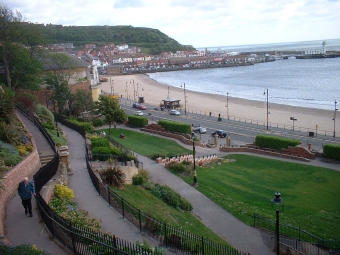 Looking back to the harbour

1930 hrs 054.16.994N-000.23.313W Scarborough. Fitted new fluxgate compass, (thanks to Joan at the harbour masters office for all the help) completed all electronic checks. Still stuck due to weather F7's forecast again tomorrow. The good thing is we are getting time to plan the next stage carefully and we desperately need to chill as the last three weeks have been frantic.

1845 hrs 054.16.994N-000.23.313W Scarborough. We are still stuck at Scarborough but not because of parts now, we're waiting for a weather window to allow us to complete the 27 hr passage to Lowestoft. All the math's have been completed and we need to leave here 24 hrs before the flood tide at Winterton (5 hrs before high water Dover) which will speed our passage to Lowestoft to arrive there on or about high water (HW Dover -0133). Quentin and Dave are still stuck at Southwold on route for La Rochelle France due to weather. 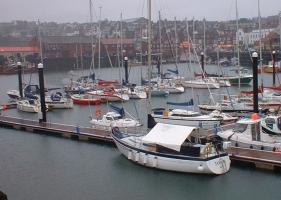 The boom tent was supposed to keep the sun off