Left Herry 0900 hrs to continue with the distance and locks to Plagny, once again stated in the Navicartes as having showers, electricity, water, pontoons and fuel. When we arrived there the services stated where ran by a charter hire company who would not let none customers use their facilities, we ended up mooring bow in again under a tree for shade. The only bit of excitement of today was when the boat in front of us at lock 23 the large double lock, lost a member of their crew in the water when she tried to jump for the quay wall and missed, nearly getting hit by the stern of the boat as it pulled in. The double lock and the pont canal immediately after it, over the River Allier which joins the Loire, is worth seeing, it lifts in two stages of 4.6 m each.

Bastille day nothing gets done by the french today. We've had enough of this little place so at 0900 I cycle to the next lock 13 km away to make sure everything's closed, and it is. 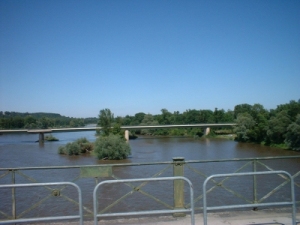 The Loire from the Pont canal just before Digoin
We decided to move off from Plagny at 1400 hrs and travel down to the next lock ready for the morning. We arrived there 1520 hrs and moor bows in, between a group of fishermen. One of whom takes to teaching us to fish for Cat fish. Takes a great deal of time to tell us how when you catch them you've to cut off the fins because of the spines in them, an entertaining afternoon, he was the only one catching fish that day. 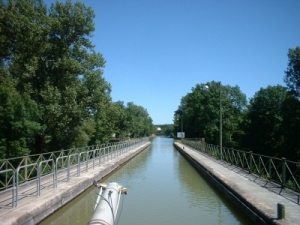 The Pont canal 7km from Digoin

Average lift 3.00 m A busy day, cast off 0900 hrs and travelled all day with two Frenchmen on a 36 ft power boat who were on their way to Spain. He tried his best to speak English and we tried our best to speak French, together we learned many words and phrases. Had a discussion with the lock keeper at lock 15. Arrived at Bourbon Lancy 1800 hrs, Great little place, one pontoon, plenty of depth and it was free. However the showers had been closed due to vandalism, so we had our own little shower with the water hose connected to the tap.

average lift 2.5 m A straight forward section with the usual depth of water average 0.5 below the keel. The last lock is interesting as it exits onto a Pont Canal over the River Loire. Some of the sections are very shallow and at one point in this 1.8m canal we dredged the bottom for over ten minutes. Arriving at Digoin at 1530 hrs with Derek waiting for us on the pontoon. 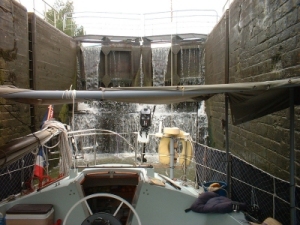 Instead of dredging the canals they try and fill them wit as much water as possible,
so all the gates overflow. A bit naughty if your at the back.


Our engine had began to smoke quite badly for the last hour. Once booked in I made enquiries with the local boat rental company about a diesel mechanic to confirm some suspicions, Tamara was moored on the other side of the bridge and the rental company asked me to move her onto their pontoons to save the fitter from walking. This is typical of France the lazy b*****ds want you to put the work on their plate. Needless to say he didn't get the job. Derek has circumnavigated the world and various other sailing activities, he's lived in France for a number of years, so I asked his advice and luckily he was talking to Michael at the time, Michael is the best diesel fitter in France and his advice is free. He came across to Tamara and told me straight away what was wrong, Two hours later I had changed all the parts he said and the smoke was gone.

Decided to stay here to day and catch up on a few jobs, Laundry, shopping for the next four days and 80 ltrs of fuel. Not much of a day off. The next four days where going to be full on and very busy with very few places to park, and certainly not next to any shops. The next stage is also where the canal changes to the Canal Du Centre. 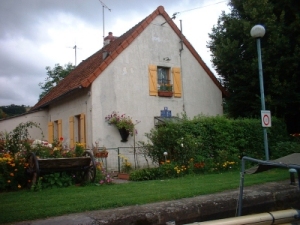 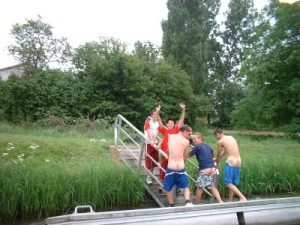 A warm welcome from the boys
﻿