Finally the weather has improved enough to allow us to move, It is forecast for SW veering to NW 3's or 4's which if it happens will suit us nicely. 0500 hrs alarms on, boats 99% prepared just the final jobs to do. 0600 hrs complete all final tasks, Radio in passage plan to Humber coast guard, receive final weather forecast, radio clearance from Scarborough harbour to leave and swing compass in the inner harbour before we leave. 0645 Tamara once again slips her moorings and begins what for us will be the first full night sail we've completed in earnest, although I have night sailed with Andy and Linda, this will be the first we have to sail 140 mile in 27 hours, in the dark and to arrive at 052.59.010N/001.36.550E (5 hours before HW Dover) pick up cardinal buoys and racon beacons to guide us into Corton Road the channel that will give us access to Lowestoft harbour. All the navigation math's have been completed, all the diagrams and buoy recognition have been drawn, as well as bearings to and from lights along the route. This allows us to check our position on the ground and not rely solely on GPS fixes every hour. As every good trip starts as soon as we left port the wind veered NE and dropped to 5 kt So unfortunately the engine stayed on as we had to fight 2 kt of foul tide for the first four hours and we crossed Filey bay to Flamborough Head, From here the course was 143 deg magnetic. Every four hours the stern gland and raw water pump are greased and every eight hours the engine is turned off and checked for oil water and any problems that could occur, the last thing we need will be to loose the engine in the Corton Road with a 3 kt tide running and shoals that are only 3m deep in places. This can very quickly be lost in rough seas. At 1110 hrs Tamara crosses from West to East (the Greenwich Meridian). At 219 hrs I switch on the radar system to be immediately confronted with a SART display 073 deg mag range 3.98 mile from my position, Listening to channel 16 and watching for any strobes or flares, A large vessel that passed within 5 mins was en route to investigate, his response to Yarmouth coast guard was that there was a yellow florescent dye in the water but nothing to be seen. At just after 2200 hrs it began to rain and would never stop until after 0600 hrs, we were both soaked to the skin, freezing and very tied. 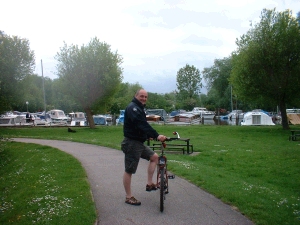 At times carrying over 9 kt SOG, we arrived three hours early, yes we could have slowed our passage to arrive on time but as you do you always make the best of good things, so to allow for thing that may go wrong. The navigation was spot on the radar picked up the Racon beacon ad the lights identified the North cardinal buoy for the Corton Road. However being early we had 3 kt of foul tide to content with and as our waypoint was 13 mile away I knew this would be a long slow passage, now was the time for some rest. Leaving Tamara on autopilot and raising Debs from her bed I retired for 3 hours of interrupted sleep, getting up to check on Debs and the progress. At 0320 hrs I was back on watch, the radar had packed up, yet again an IP68 deck plug had taken in water causing a short circuit, as day light wasn't that far away I just switch the rest of the system off. With the wind behind us at 15 kt I put up full sail which eased the pressure on the engine quite considerably, as the tide turned again we picked up to over 8.5 kt over the ground. Which helps when your very tied and just want to go to bed tied up along side. The rest of the trip was pretty uneventful except for the strength of tidal flow across the harbour mouth, which we had been told about but was still strong. At 0745 we tied up on the visitors pontoon of the Royal Norfolk and Suffolk yacht club £19.75 a night plus electricity but we need the rest, We intent to stay until the weekend to recover and plan the next jump, as well as carrying out the repairs to the radar system. At 0821 hrs we signed off with Yarmouth Coast guard and requested them to inform Humber, ( of which our daughter Gemma is a member at Amble) that we had arrived safely at Lowestoft. The rest of the day was spent in bed trying to recover. 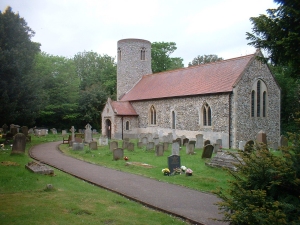 The Pebble Church At Lowestoft

The day started early at 0600 hrs we decided to get up and start all the little jobs, Tamara needed cleaning and tiding up after the long trip things were a little out of place. Due to the fact I hadn't greased the stern tube every four hours we had taken in a small amount of water to the engine bilge. The stern was dirty from the exhaust which because the engine had run for the entire 25 hrs We also had to do the ordinary tasks such as shopping and laundry. We've got this down to a fine art now, we can feed ourselves and eating very well with wine included for our evening meal for around £10 per day. In the afternoon we got the bikes out from the aft cabin and spent the rest of the day cycling along Oulton Broad and surrounding areas. We returned to the boat to find a flotilla of Dutch boats had arrived about 10 in all, these were rafted on to each other, filling one of the aisles. Our plans from here are to move to Shotley point down at Harwich and then to Ramsgate or Dover for the crossing to France, weather permitting we'll make the first move on Sunday as the tides are favourable at 0745 hrs. We should be able to make the distance in about 5 hours. 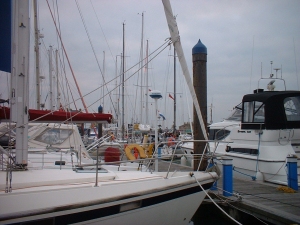 The Dutch Are here

The weather forecast for today is terrible, F8's SSW, several Dutch boats were preparing to leave for Southwold a short hop of 7 mile south of Lowestoft, all returned after a couple of hours, the situation out there is desperate. We continued with the preparation for our next passage, The bilge's had to be cleaned and the radar sorted out. I had had the plug open on deck since we arrived letting it dry out, after checking all the connections and cleaning where necessary it was reassembled and check. It was still giving false echoes and I think this is due to dirty or corroded connections. Tonight we will be planning the next leg of the passage, checking all the waypoints, and making the diagrams and notes of all the VHF channel numbers that we will need, it's quicker to reference from diagrams than the pilot books. We managed to get hold of an Imray C1 chart from a chandlers up in the broads when we went of a bike ride on Thursday. I'm so pleased we brought our bikes which live in the aft cabin when not in use, they give us an incredible amount of freedom to roam when we're stuck due to bad weather.

Dave, the birthing master at Royal Norfolk and Suffolk Yacht Club, who also happens to be the box on the Lowestoft life boat did happen to mention that as we were from the Royal Northumberland Yacht Club, did we know the boat Whisper, that a colleagues of his had towed in to Lowestoft only a few weeks ago after a collision with a gas tanker some 6 mile SE of the harbour. All the staff at RN&SYC are extremely helpful make everyone feel at home.