Guess what, the lock that lets you into the canals has broken and will remain shut for three weeks. We will have to look at moving to Gravelines 15k up the coast. Inquiries show they have facilities for removing the mast. And to cap it all, it's a French bank holiday, which means a lot of places are closed Sat, Sun, Mon. 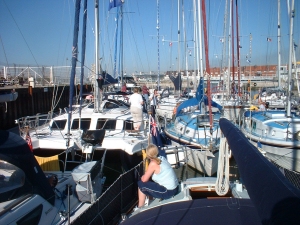 But the up side is the weather is red hot, clear blue skies very little wind. About another fifty boats from England turn up and the raft just gets bigger, so does the queue for the showers, you gotta be up there at 0600 hrs or you miss out. This weekend they're starting a round Britain race from here and some of the racing boats have began to arrive, very, very, very expensive equipment. As forecast the weather for the weekend is starting to deteriorate, winds forecast in excess of F7 NE and rain,

Calais 22.60 Euro a night, good marina, expensive for what it is, no laundry, electricity set so low it trips at the slightest of requirements. Three toilets and showers for over 300 boats. All publications in French, German and Dutch, NO English. We were unlucky to arrive at the same time as two clubs holding their Calais Rallies which made it very busy, however the people we met were a good laugh, no airs and graces. There is (or will be on Monday) wifi connection with Orange, but it costs you. Don't pay for your moorings by credit/debit card, if you decide to leave early they will not refund to your card, they will give you a credit note for the remaining nights. Saturdays there's a big market on in the square, a large bag of veg, including half a roast chicken and hot roast potato's cost you just over 4 euro's for two, Wine, for nothing, there's a little Vietnamese guy runs a wine store in the market square and he'll deliver to your boat. 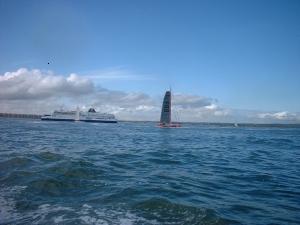 Woke to find the sun shinning in a clear blue sky, not the F7's that were forecast. Went early for a shower and left Debs sleeping. At 0900 hrs everybody got busy with a hurried decision to leave for Gravelines. As I was casting off Chris on the boat rafted to us, he shouts across, "are you's coming, there's a weather window of a couple of hours before the wind picks up and we're away to Graveline". It's a good job we always keep the boat ready for sea, it took us about 10 minutes to sort everything out and cast off, we followed the last couple of boats out of the lock and headed for sea. 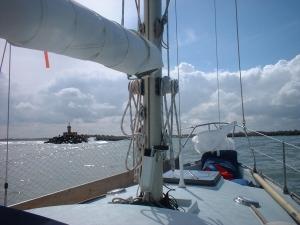 
We need to make arrangements for the removal of the mast and shipping to Sete on the south coast. Graveline is a very historical town as this was the place the Spanish fleet embarked for the invasion of Britain, we got a couple of days to explore before moving on. We got the bikes from he rear cabin and went off into the countryside 15 Km along the canals that we'll sail along later in the week, we wanted to see what lay in store for us

We've just found out that we are stuck here till Monday at the earliest, we can't get the mast off any quicker. There's a crane coming in on Thursday but it's fully booked, however we will prepare the mast just in case there's any cancellations or someone doesn't turn up and we get a slot. Don't believe the literature on how you can get Navicarts, books and vignettes from most points of entry into the canals, you can't, we are going back to Calais by bus as the only VNF office this side of Paris is there. If you want books etc. in English bring them with you, there aren't any here.

We met Tom, Les and Dave oh yes and Winston who arrived earlier today, he had all the books and charts in English, so a quick trip to the local Mediatheque and 2 Euro later we have photocopied all the relevant pages from his books and charts. The vignette for the sixty days we plan on being in the canals has cost us 181 Euro and for that you get no information from the NVF office at all, other than a very vague map in french.

The book to get hold of for good quality information is The Channel to the Med by Derek Bouskill ISBN no 1-898574-03-0 published by Opus it gives excellent clear information on the routes. We brought with us a book call The French Canal Routes to the Mediterranean by Michael Briant, waste of time and £15. The quality of the diagrams and so called charts are so inferior that in most cases the text cannot be read. 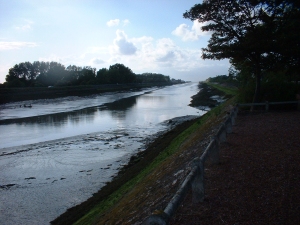 One company he recommends for transporting masts and boats by road to the south coast, Augizeau Transports, quoted us 1083 Euro's to transport the mast to Sete, I didn't want to buy his truck!! It took this company 2 days and several phone calls to fax through the details. I wouldn't recommend this company to take anything except the Mickey

Rob and Jean who have been having trouble with their propeller have finally got back in the water 10 mins before we take our mast off. They're heading off up to Holland to catch up with the group that we met at Calais, unfortunately They lost a blade from the prop and managed to acquire a three bladed prop from a friend all be it the wrong hand. So when his engine was in reverse the boat was going forward. A lovely couple with some great stories to tell. I just wish we had more time together. Andy and Linda left Blyth June 01 and were sailing to Peterhead in Scotland on the first leg of their trip around the UK and which will lead them to cross the Atlantic to the Caribbean and from there further afield

Graveline 17.50 euro a night, electricity included good clean facilities and an Lidl in the corner of the harbour, very cheap food and drink, cheaper than the UK, you can live here for 10 euro a day. Fuel is available from the local SUPER U, 500 yards down the road 1.05 euro per litre. The harbour is drying, especially when the lock keepers forget to close the sluice gates however the mud is very soft and you sink in nearly to the waterline. It also has a chandler (very helpful) and boat storage facilities (undercover), regular bus service back to Calais. A wine cave just over the bridge that sells good cheap wine. Internet connections are few and far between, there are PC's you can use in local libraries or some cafe's but very few have WIFI (weefee) as they say. So you need to carry all your bank details with you. The town it's self is a beautiful old fortified town with all the walls and moats still complete it's a great place to spend a couple of days exploring, if your daft enough you can hire a rowing boat and row around the outer moat. The town is getting a lot of money spent on it but all the development is in-keeping with the towns history and existing buildings, to the point where they even put different coloured tiles on the roofs to make new builds look as though they been there for years. Well worth the visit