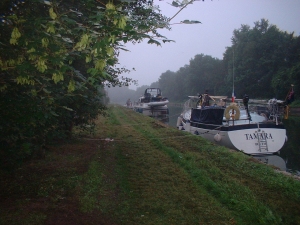 The overnight stop on the bank

After our overnight stop on the banks of the canal, we set off early to complete the short trip to St Quentin. The Lesdins tunnel was just around the corner. This one isn't so bad it's only 1 km long and you motor it under your own power. The information given, is that is light controlled (it wasn't) you basically take your chances. Boats and land don't mix, boast underground is even worse. It's tight, and obviously no where to pass if you meet something coming the other way one of you is reversing all the way out. Once out of the tunnel we had five locks t negotiate, going down hill, so it should have been easy. We reached the first Ecluse de Lesdins, we stopped back to let tom in the lock on his own, as from experience this is the easiest way to handle them. The lock keeper got a bit shirty and insisted that we go in as well. I tried to explain about the length of the two boats plus the overhang for the mast. He was having none of it, so I told him in no uncertain terms if there was any damage I would be looking to the VNF for all bills. The lock went through its cycle and the gates opened, Tom left and as we followed the gates began to close on our bows. We just managed to reverse the boat away in time. 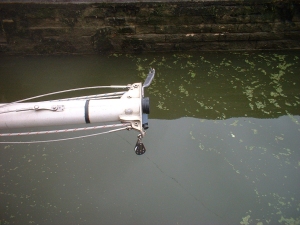 Damage to the mast head

I sounded our fog horn until the lock keeper returned,he had gone off leaving the lock on auto, I climbed out of the lock and, well as you can imagine I told him I wasn't very happy. I then insisted on his supervisor from St Quentin office attend. Guess what, he couldn't speak any English. So I made him ring the office and get someone who could. All this time Tamara was still in the lock, the lock keeper wanted her moved to free up the canal and I absolutely refused until this was sorted. I effectively stopped the operation of the whole canal. I then insisted that the supervisor take me to the office in St Quentin and complete an incident report with Nadine who could speak English. Then and only then I agreed to move the boat. I would strongly advise anyone in he same situation to do exactly the same. Refuse to move the boat until you get satisfaction, this puts the pressure on them as it stops the operations. Make them complete all the paper work, by doing this the pleasure craft owners will force better treatment from the VNF which at the minute is sparse. So we returned from our little adventure to St Quentin and collect Tamara, with the four locks and a couple of km to complete. We arrived to the halte fluvial just after 1300 hrs.Couple of other things to bring, a diving set, I took two pony bottles which give about 30 mins each of air at a couple of meters, plenty time to sort out any underwater problems. An extremely sharp knife to cut away rope and poly bags from around your prop and something to poke down your raw water inlet to clear the leaves, grass and duck weed you will suck up everyday. Or fit a course strainer skin fitting to stop leaves etc. from getting that far. 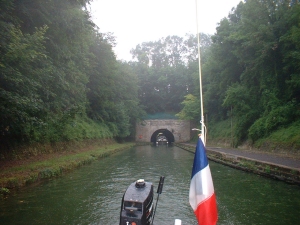 
0815 hrs left St Quentin the canals narrow in and the scenery improves. The side of the canal have collapsed in but renovation work is proceeding. The locks are all automatic and once past St Samna both locks are working at every station which makes thing a little quicker. This passage still took until 1600 hrs to complete, the weather was good for travelling, not like yesterday which was read hot. About 5 minutes from completing the journey the weather broke and began to rain with the odd clap of thunder, we were soaked to the skin but it's funny how the rain is warm and you don't mind being out in it. We'll move to Compiegne tomorrow and see about the filters and oil leaks.


This is straight forward with four locks to complete, as we let loose for the trip down a boat moored along side us also let loose, Black Magic 1 with George and Lucie on board. They are French Canadian and not only very friendly and helpful people, but George and Lucie speak fluent French and was a heavy plant fitter and has worked on all types of diesel engines and transmissions which comes in very handy. They've been sailing around Europe for the last couple of years and had the boat shipped form America. With this experience the know all the best places to visit and more importantly the places to avoid. We're all staying together until Paris when they'll be leaving us for a jazz festival. The locks on the way down are straight forward, however the last one Janville, is very busy with commercial traffic been given priority. As we approached George had radioed the control to find that two peniches were passing before us. On entry George was at the front with us at the rear, the right hand lock is out of commission so excessive water was running over the gates behind us and we were too far back in the lock, as we let loose to leave we were turned sideways across the lock, we very quickly recovered without damage. 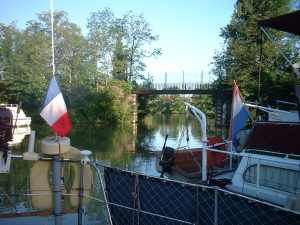 The entrance to Compiegne

There's one thing on this trip our boat handling skills have improved dramatically over the last few weeks. Once through Janville it's only a couple of K's along the river to Compiegne, which is found through the first bridge, past the island in the middle of the river and it's on the left hand side. Through a small bridge, its very tight and shallow, we were registering 0.2 M under the keel and when we moored we registered zero. The bottoms soft mud, there are pontoons, electricity, water, toilets and showers and it's all free for two nights. The town has a market on Saturday morning and believe it or not (very rare in France) it also has a big chandlers. Having said that I wanted an oil filter for the gearbox (I did bring three spare with me, but the shop had supplied the wrong ones) It was going to take eight days to get one. They also supply fuel, engine and boat repairs, it's on the right hand bank, you can't miss the distinctive yellow and blue fuel barge. They also speak a reasonable amount of English. We will be staying the two days, to give my left leg time to recover as I ripped the calf muscle again, while jumping onto Toms boat as he was entering the halte.. 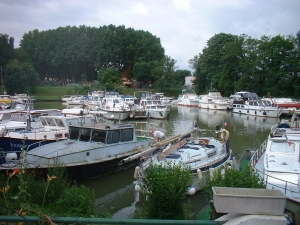